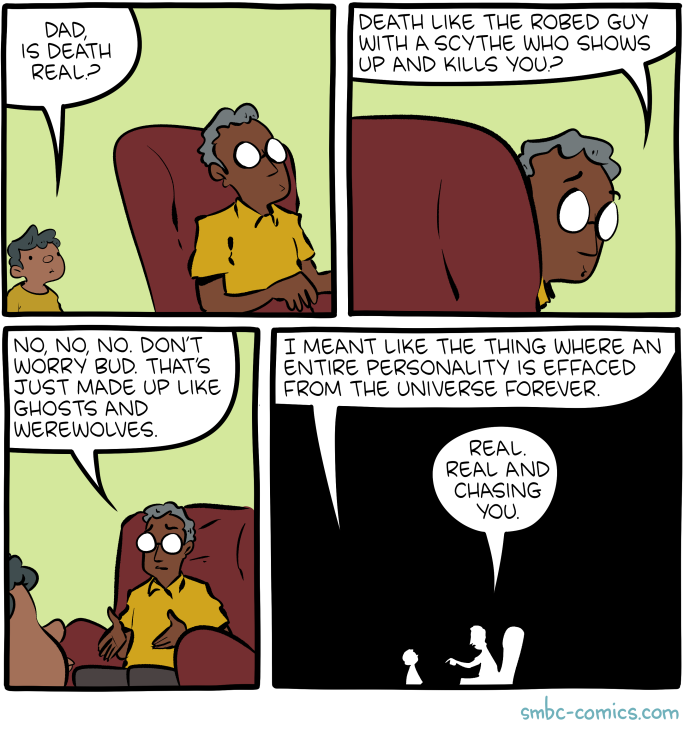 Hovertext:
The standard issue red recliner is the best part of becoming a dad.

My six-year-old is very into theodicy, in that she sometimes starts crying at bedtime and demanding I explain to her why god allows death and "bad guys" to exist.
Columbia, MD

roblatham
she is all of us... 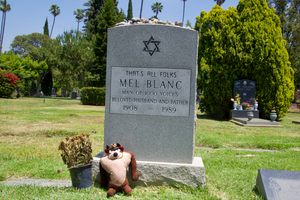 Hollywood Forever Cemetery serves as a resting place for as many a star as there are in the sky, so you may not be amazed to come across the grave of a world-famous celebrity there. But some also come with amusing epitaphs or fascinating designs, and one of them says it all in just three words: "That's all, folks!"

Of course, this is the grave of Mel Blanc, the Man of a Thousand Voices, who gave his heart and soul to many beloved cartoon characters. During the Golden Age of American Animation, he voiced such icons as Bugs Bunny, Daffy Duck, Porky Pig, Woody Woodpecker, and more, as well as several Hanna-Barbera characters in the later years of television. Today, he is considered one of the greatest and most influential voice actors in history.

Blanc's career first took off with a KGW radio program when he was only 19, showcasing his ability to use multiple different voices. Less than a decade later, he started working for Leon Schlesinger Productions, which would be later renamed Warner Brothers Cartoons. In 1937, he replaced Joe Dougherty as the voice of Porky Pig in the short Porky's Duck Hunt, also debuting as Daffy Duck.

Despite his stellar contributions to animation, Blanc's filmography includes few Disney projects with the exceptions of Who Framed Roger Rabbit (in which he reprised his Looney Tunes roles) and Pinocchio, in which his lines were cut in the final product.

Blanc passed away on July 10, 1989, at the age of 81 from complications of emphysema and coronary artery disease. According to his will, his gravestone was fittingly engraved with Porky Pig's famous catchphrase, "THAT'S ALL FOLKS." It also bears the Star of David and his title: "MAN OF 1,000 VOICES." It can be easily found in the cemetery's section 13, Pinewood, Plot #149.

rraszews
reply
For my money, the best "celebrity" epitaph came from Jack Horkheimer, the host of a PBS astronomy show (his sign-off was "Keep Looking Up"): "Keep looking up was my life's admonition. I can do little else from my present position."
Columbia, MD 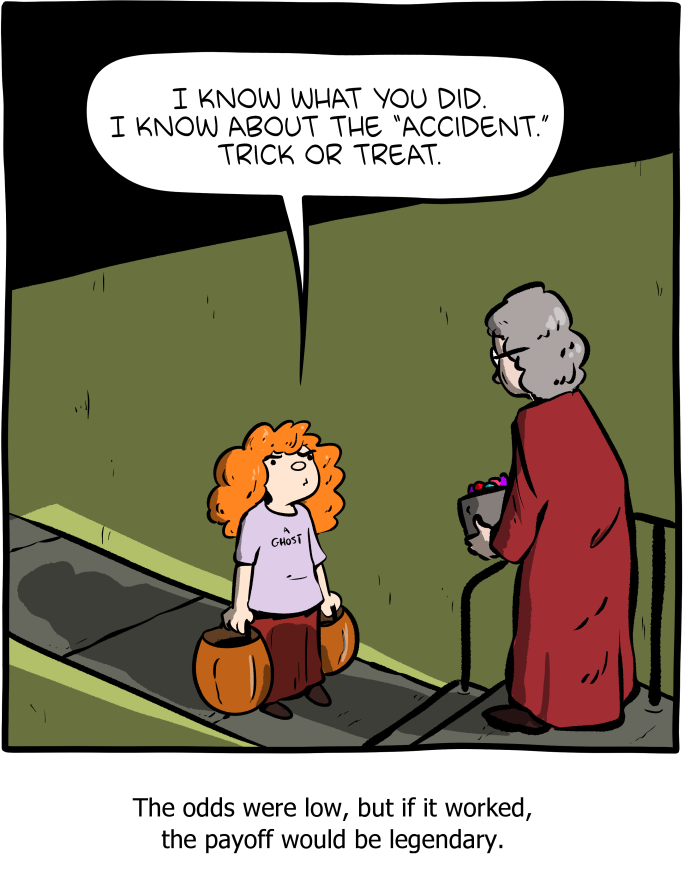 Hovertext:
This has more shading than the last 18,000 comics put together.

Arthur Conan Doyle is said to have once speculated that an ad placed in the Times saying only "All is discovered. Fly at once" could cause a mass exodus of the house of lords.
Columbia, MD 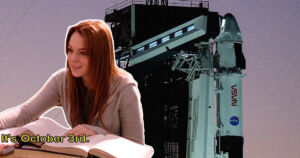 SpaceX and NASA launched yet another crew of astronauts to the International Space Station today — and crews back on the ground chose to take advantage of the momentous occasion to inject some much-needed levity in the form of a "Mean Girls" reference.

"And while October 3 may belong to the Mean Girls, October 5 will forever belong to Crew 5," SpaceX ground control told crew members shortly after stage separation, a reference to the 2004 hit comedy "Mean Girls."

The joke served to break down the fourth wall a little; a refreshing reminder of the human beings at SpaceX who make a highly complicated procedure like launching astronauts into space possible.

The Limit Does Not Exist

It was a surprising moment that had onlookers taken aback. "Did they just reference 'Mean Girls?'" NASASpaceFlight's Chris Bergin said incredulously during a livestream of the event.

In case you're not clued in, it's a popular reference to an otherwise innocuous moment in the movie, in which Jonathan Bennett's character Aaron Samuels asks Lindsay Lohan's character Cady Heron what day it is — a scene that has since been turned into a meme and a yearly celebration.

In short, it's exactly the kind of tongue-in-cheek break from procedure we've come to expect from Elon Musk's portfolio.

And while we can't help cringing a little bit at the movie reference, it's a harmless joke — and we're here for it. 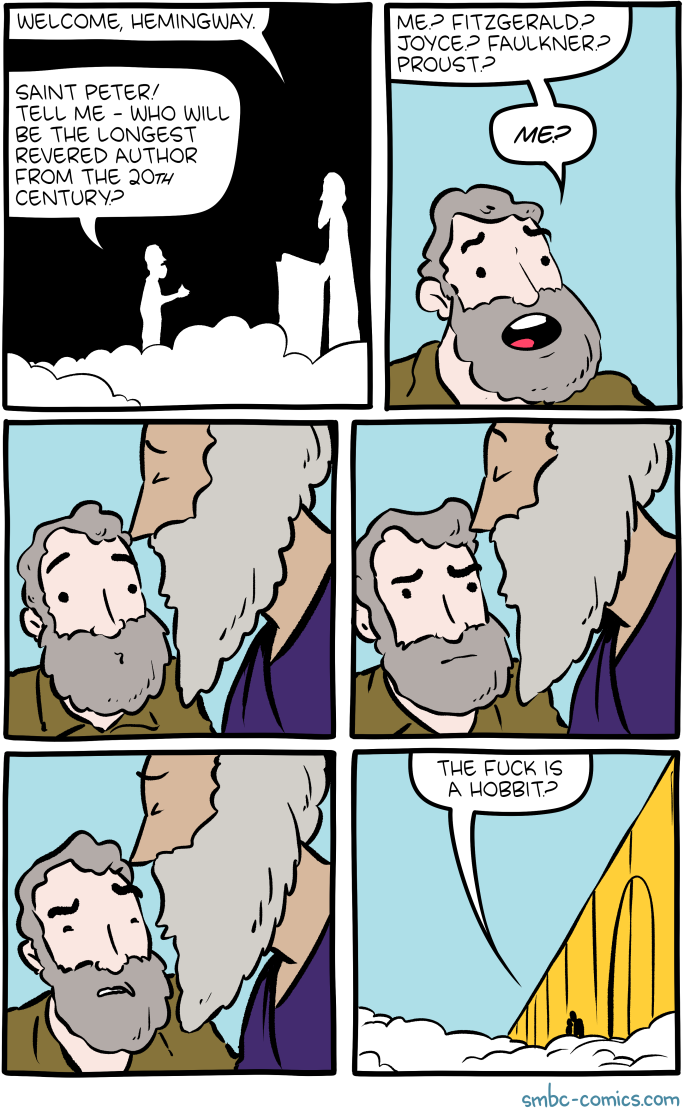 Hovertext:
Tolkien ends up in Heaven but is secretly disappointed Valhalla wasn't available.

"Okay so the bad news is that it's Rowling, but the good news is you are definitely not going to run into her here."
Columbia, MD
Next Page of Stories